Garrett Zuercher
The theme for this month - June 2013 - was films, each play taking on a different genre. Being deaf, I naturally asked to do silent films and was thankfully given the opportunity. The three conditions were: 1) each play would be in a different genre, 2) each play had to incorporate both filmed and live elements, and 3) each play had to have the line, "Can I try that again?" Since one of my actors was Becky Baumwoll, an extremely gifted mime, I knew I had to make full use of her exemplary skills. In the end, I decided to use each of the three actors twice, once in the film and once onstage, having them interact with each other.

The gist of the story was that the three characters - two of them film students, the third just a friend - were watching a silent movie. The friend, played by Becky, decides to interrupt the film and ask the actors just what is going on while the two film students, horrified and mystified, watch. What I especially loved about this was giving Becky the chance to act with herself onscreen. It required a great deal of practice and finesse to work out the timing so that the onstage actors could match the onscreen movie but I give full credit to my amazing director, Richard Aven, for making it happen so seamlessly, especially considering we only had two weeks of rehearsal (including filming the movie, editing it, and working out the timing) and less than an hour for tech. I don't write easy plays, that's for sure. 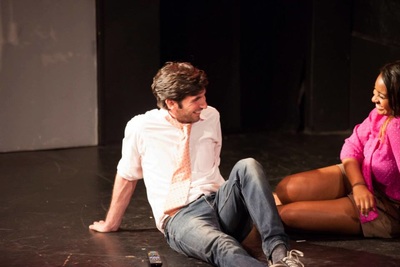